Kizuna Heights’ location along Taft Avenue in the Malate district of Manila is one of Manila’s most sought-after because of its high concentration of educational institutions, aside from the prominent De La Salle University and the De La Salle-College of St. Benilde. Other schools that also surround Kizuna include the St. Paul University and the University of the Philippines- Manila, which is a one-ride away from the condo project. Aside from these prestigious schools, there are more top-caliber schools closer to your new home. Some of these respectable learning institutions are the Arellano University Law School, St. Scholastica’s College (a premier Catholic school), Arellano University Abad Santos Campus, and other educational and training centers.

Moreover, the immediate vicinity of Kizuna Heights Manila is also home to various local and foreign-style restaurants (such as Chinese, American, Korean, and Japanese restaurants). This area of Manila also has several banks, convenience stores, 5- Star hotels, corporate offices, fast-food stores, and wellness centers, among others. Kizuna is easily accessible where ever you are coming from or anywhere you are going to from Metro Manila’s key destinations. Aside from being just a spit away from Quirino Ave. (if you want to go to Makati or Quezon City) to the east and Roxas Blvd. to the west, the gateway to the NAIA Terminals or farther south to Cavite province. This affordable condo development lies closer to the Eva Macapagal Super Terminal where there are ferries that can take you along and across Manila Bay (to Cavite, Bulacan or Bataan provinces). Students coming from these areas will find Kizuna the most economical way to live in Manila because of the easy and quick access from various points of origin.

Manila is the Philippines’ capital city and one of the world’s oldest which is home of some of the country’s several historical sites. The city is rich in modern and old diversities where some of the best nightlife outlets, especially the Malate district, and various tourist destinations are easily accessible. The city is serviced by varied mode of transport (such as light rail trains, buses, jeepneys, taxis, and UV Expresses).

Kizuna Heights Malate Manila is quite interesting to live into. Its modern contemporary building design blends with some of the city’s famous and modern landmarks; as well as the aesthetic aspect of the tower. The great view of Manila’s skyline and those of nearby cities provide endless beauty and priceless aesthetic pleasures that will make your investment low-risk. Owning a unit at this amazing property is one of the surefire ways of owning a piece of rustic Manila. 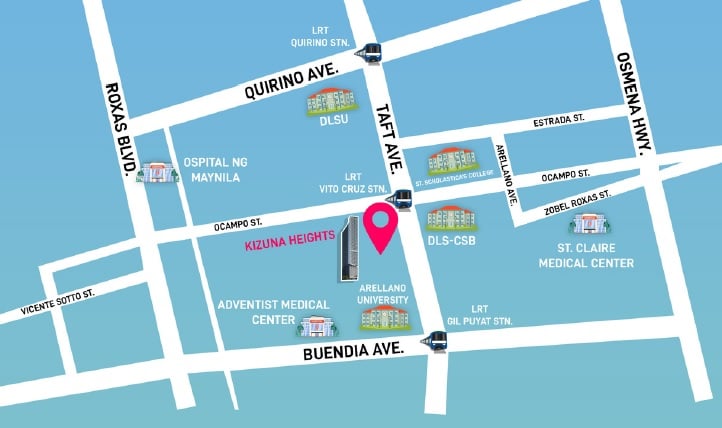